Mason Graphite’s 100% owned Lac Guéret property is located in northeastern Quebec, about 285 km north of the main service centre of Baie-Comeau and about 660 km from Montreal. 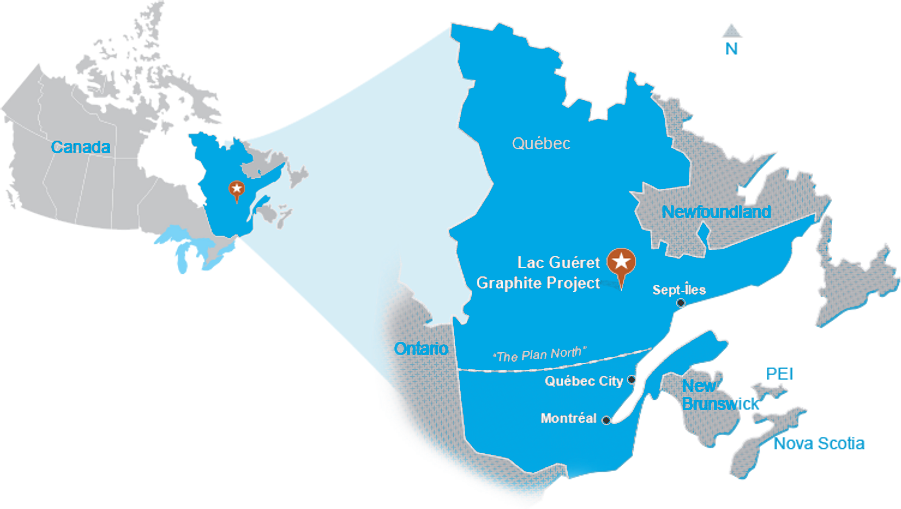 Mason Graphite’s Lac Guéret property is located in Quebec, one of the world’s most attractive jurisdictions for mineral exploration and development. It also falls within the “Plan Nord” territory in northeastern Quebec, which is an economic development strategy launched by the Government of Quebec in May 2011 to help the progression of Quebec mining projects located north of the 49th parallel1. 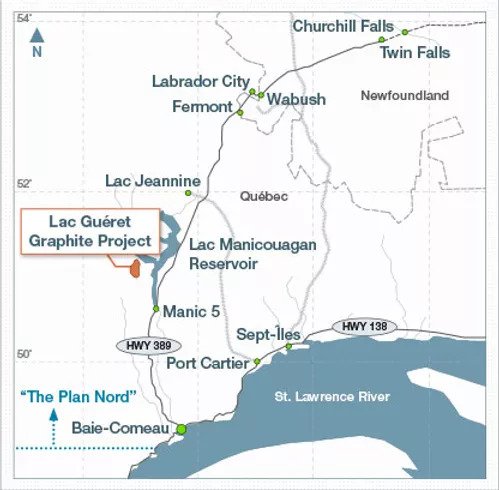 The Feasibility Study was prepared in partnership with several Quebec-based engineering firms:

*Unless otherwise noted, all monetary figures related to the Feasibility Study are expressed in Canadian dollars.
(1) FCA Baie-Comeau: Free Carrier Incoterms – Seller is responsible for the delivery to the custody of buyer’s carrier.
(2) Foreign exchange rate $0.77 USD = $1.00 CAD

Process designed for standard purity of 96% Cg in coarse products, capable of reaching up to 97.5% Cg in the same size fractions

Waste to ore stripping ratio of 0.8:1

The Feasibility Study presented a project life of 25 years using the Mineral Reserves of 4.7 million tonnes. But the pit optimization study looked at a much longer mine life where the “IN-PIT Mineral Resources Beyond Project Life of 25 years” of 58.0 million tonnes grading 16.3% could be used for an eventual extension of activity. No further drilling would be necessary in order to reclassify these IN-PIT Mineral Resources as Mineral Reserves in an eventual economic evaluation but there can be no assurance that they may be converted. The same pit optimization study was able to determine the best location for the initial 25 years of project life providing a high head grade and a low waste to ore stripping ratio.

Beyond Project Life of 25 years

To date, Mason Graphite has identified two graphite zones on its Lac Guéret property: the GC Zone and the GR Zone.

Graphite mineralization in the GC zone has been mapped on strike up to 1.2 km and at width up to 400 m. This zone has excellent mineral resource growth potential as the mineralization remains open at depth.

Graphite mineralization in the GR zone has been identified on an area of up to 1 km and up to 110 m wide. 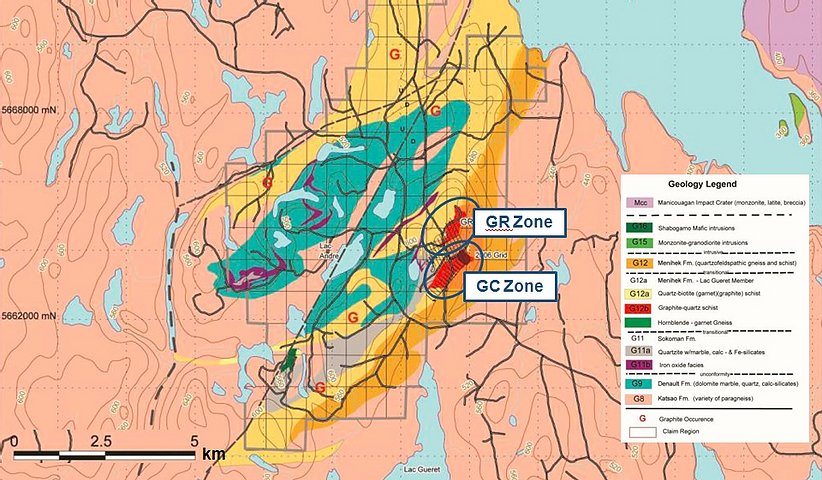 The project involves developing the Lac Guéret graphite deposit, located approximately 285 kilometers north of Baie-Comeau, one of the highest grade deposits in the world.

Including the development of an open-pit mine and the establishment of a processing plant in the industrial park Jean-Noël-Tessier in Baie-Comeau, the project will generate approximately 100 direct jobs in the operating phase.

With a capacity of approximately 52,000 tonnes of concentrate per year, the project has an estimated initial production life of more than 25 years, after which only 7% of the estimated total resources will have been extracted. Currently, only one graphite mine is active in North America.

Graphite is a much sought after and essential product. Its demand and consumption are growing due to its unique properties and its many different applications.

Located at surface, the ore of Lac Guéret has an exceptionally high purity. Studies have demonstrated a long life of the deposit and excellent economic profitability.

The project management team is experienced and has extensive experience in graphite production, R&D and sales. It has an excellent history of achievements both in Quebec and abroad in the targeted field of graphite.

The territory is very conducive to mining; accessible at all times and close to major mining service centers.

By submiting this form, you agree to receive email communications from Mason Graphite Inc. You may choose to opt-out at any time.